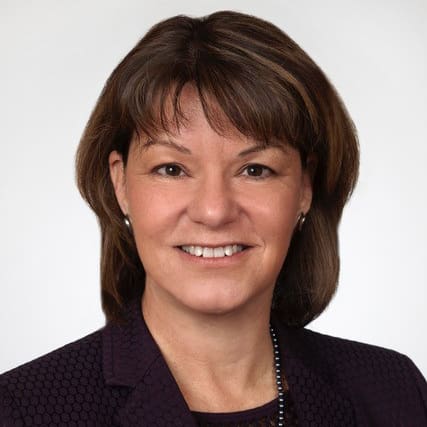 Suzanne “Zan” Vautrinot is President of Kilovolt Consulting Inc. and currently serves on the Boards of Directors for Wells Fargo, ECOLAB Inc., CSX, Parsons, and Battelle Memorial Institute.  Previously, Zan achieved the rank of Major General in the U.S. Air Force where she accumulated over three decades of experience in space and cyber operations.  Before retiring from active duty, Zan served as the commander of all Air Force cyber forces where she oversaw a multi-billion dollar cyber enterprise; leading a workforce of 14,000 military, civilian, and contractor personnel, while conducting worldwide cyber operations. She was instrumental in the establishment and early operation of U.S. Cyber Command with responsibility for conducting offensive and defensive cyber activities for the Department of Defense.

Zan is universally respected as a motivational leader, speaker, and change agent.  As a cyber subject matter expert, she has addressed technical, business and university forums, guided key task forces, and provided testimony before Congress.  She currently advises industry, academia as well as government agencies and laboratories on cybersecurity strategy, technology, innovation, and workforce development.  Zan has received a number of prestigious awards, including National Defense citations, the Symantec Cyber Award, Women in Aerospace Leadership Award, Air Force Association Aerospace Citation of Honor, “Women Worth Watching” from Profiles in Diversity Journal, the Presidential Award for Training, Cyberscoop’s Top “Women in Cybersecurity”, and “50 Politicos to Watch.”   She was inducted into the National Academy of Engineering in 2017.

She earned her Bachelor of Science degree as one of the earliest female graduates of the U.S. Air Force Academy, has a Master of Science degree from the University of Southern California, and was a National Security Fellow at Harvard University.  She is also a graduate of the United States Air Force’s Air Command and Staff and Air War Colleges, as well as the Harvard Black Sea and International and National Security Programs.