This author has not yet filled in any details.
So far Cyber Florida has created 56 blog entries.

Bob Brese is a Vice President and Executive Partner with Gartner, Inc., the world’s leading research and advisory company. At Gartner, Mr. Brese manages and owns relationships with public and private sector executives, advising them on technology and technology-enabled business strategies to drive revenue and mission value along with the management of enterprise cost and risk.

Prior to joining Gartner, Mr. Brese was a senior executive (SES) at the U.S. Department of Energy (DOE), serving in a variety of leadership roles for an Agency whose national laboratories, production facilities, nuclear security, and environmental cleanup missions span open science to national security. In his final assignment as the Department’s Chief Information Officer (CIO), Mr. Brese led DOE’s $2 billion annual investment in technology and cybersecurity. Mr. Brese simultaneously served as the Department’s Senior Agency Official for Privacy and for Information Sharing and Safeguarding as well as two years as DOE’s Acting Chief Information Security Officer. A leader in the national cybersecurity community, Mr. Brese was a key contributor to the Obama Administration’s success in cyber legislation; policy; cybersecurity technology research, development, and deployment; and in the cybersecurity protection of the country’s critical infrastructure, including the development of the DOE’s Cybersecurity Capability Maturity Model (C2M2) for the Energy Sector.

In the Fall of 2012, Mr. Brese led a team of Presidential Innovation Fellows and other public and private sector innovators to leverage technology and social media to speed and enhance the government-wide disaster response in the aftermath of Hurricane Sandy. In 2014, he and the Assistant Secretary for Electricity and Energy Reliability co-sponsored the American Energy Data Challenge to spur the creation of new tools and insights for the American public related to energy generation, distribution, and use to accelerate the 21st-century energy economy.

Mr. Brese’s other Government Executive assignments included service as the DOE Deputy CIO, Acting CISO (simultaneous with DOE Deputy CIO and CIO roles), as Deputy CIO for DOE’s National Nuclear Security Administration (NNSA), and as the founding Director of NNSA’s Defense Nuclear Security Office of Performance Assurance. He also served as a nuclear submarine officer in the U.S. Navy, retiring after a 22-year career. During his military career, he served in a variety of operational and headquarters assignments, completing seven major sea deployments, and serving in every ocean and major sea. Mr. Brese also serves as a CIO Senior Advisor to Government Executives (SAGE) with the Partnership for Public Service; as adjunct faculty for the University of South Florida Muma School of Business Cybersecurity for Executives Program; as a guest lecturer at other universities; and on the Advisory Board of Interos, Inc., a supply chain risk management SaaS platform start-up which achieved Unicorn status in 2021. In his spare time, he is an avid cyclist and an Ambassador for World Bicycle Relief, a charity focused on ending transportation poverty in Africa and other underdeveloped countries.

After graduating from the U.S. Coast Guard Academy, Dan began his career as a Federal Law Enforcement Officer leading at-sea boardings around the world in pursuit of suspected drug-runners and pirates and then commanding an 87’ Cutter in San Francisco, CA. He later earned a Top-Secret clearance and served as a Program Manager for the Pacific Area Fleet before transitioning to civilian life and beginning his career in cyber risk management and security.

After five years at a Fortune 500 company where he ultimately served as Chief of Staff for the SVP responsible for over $2B in annual revenue, Dan founded Arete Solutions. Arete {ah-reh-tay} is an ancient Greek concept for “the pursuit of excellence,” and Arete Solutions is a cybersecurity consultancy and disabled veteran-owned small business that advises and supports US government and corporate clients on IT and cybersecurity risk, strategy, and execution. Dan and his expert associates surpassed $3M in revenue in the first 18 months by performing assessments, documenting and delivering plans, policy, and research, managing and staffing technical projects, and reselling hardware and software tools. Their mission is to help clients make excellent decisions.

Dan’s volunteer time is spent facilitating practical cybersecurity experiences and mentorship for K12 educators and students across Florida. He serves on the Board of the 1K+ member Central Florida AFCEA Chapter as the Cybersecurity Outreach Chair, where he is responsible for coordinating mentorships, field trips, competitions, and teacher professional development with partners across industry, government, and academia.  Dan also serves on the West Florida Area Maritime Security Advisory Committee, helping improve critical infrastructure cybersecurity practices.

Pam Lindemoen is an Information Security executive leader with over 25 years of experience within the IT industry. Pam joined Cisco from Anthem, Inc. where she held the Deputy Chief Information Security Officer role.  While at Anthem, she was considered a bold and strategic thinker who envisioned and delivered the world-class Enterprise Information Security strategy, including the Steering Committee with cross-functional business and technology membership. Pam was also a key advisor to the litigation process and full program development during and after an unprecedented cyber-attack. The foundation for her success was built upon her innate ability to foster business partnerships and support all stakeholder needs.

Prior to Anthem, Pam had significant success leading business development, software development, IT operations, program improvements, and direct sales. In her executive leadership positions, she has played pivotal roles in the development of innovative products and services for key accounts and developed IT solution strategies that led to multibillion-dollar contracts with global vendors and customers.

Not allowing her intrinsic drive and commitment to stop with success in running business, Pam is dedicated to the encouragement of women in business and IT.  In addition to her track record of mentoring women into the Information Security space, she was an inaugural member of the Anthem Women in Technology Steering Committee.  This resource group provided a forum to discuss, share, and learn more about concepts that are unique to women working in the technology field.   She is also an avid community activist and volunteer for the Ronald McDonald House, Habitat for Humanity, and Tampa Bay Watch.

Pam is a native of Atlanta, GA, and currently resides in St. Petersburg, FL where she enjoys cheering on the Tampa Bay Lightning, boating, and spending time with her family.

Serge Jorgensen is a founding partner and Chief Technology Officer in the Sylint Group, and provides technical development and guidance in the areas of Computer Security, Counter Cyber-Warfare, System Design and Incident Response. Sylint is comprised of ex-intelligence agency, military, law enforcement and industry experts, and is 1 of 10 companies accredited by the NSA for incident response and 1 of 12 approved by the Card Brands as a Payment Card Forensic Investigator. As such, Sylint routinely responds to nation-state and organized crime attacks against critical infrastructure, defense industrial base, manufacturing, and healthcare environments.

Cyber Florida will be exhibiting at the I/ITSEC Conference from Nov. 29-Dec. 2 in the EcosySTEM of Learning section of the Exhibit Hall, Booth #3087. Stop by to say hello, speak with staff, learn about our programs, and grab some Cyber Florida swag!

I/ITSEC is organized and sponsored by the National Training & Simulation Association (NTSA), which promotes international and interdisciplinary cooperation within the fields of modeling and simulation (M&S), training, education, analysis, and related disciplines at this annual meeting. The NTSA is an affiliate subsidiary of the National Defense Industrial Association (NDIA). Hence, I/ITSEC also emphasizes themes related to defense and security.

Cyber Florida is proud to be a sponsor for CARVERCON, a conference focused on the CARVER Target Analysis and Vulnerability Assessment Methodology to be held on November 12 at the University of South Florida Sarasota-Manatee Campus. Cyber Florida Staff Director Dr. Ron Sanders joins other esteemed speakers Leo “Godfather of CARVER” Labaj; General Edward Leacock, Former Deputy J2 of USAFRICOM; and Keynote Speaker Mark Kelton, former Chief of the CIA Counterintelligence Center and Deputy Director of the National Clandestine Service.

This year’s topics include

CARVERCON provides attendees with an opportunity to hear from a wide variety of critical infrastructure protection and vulnerability assessment subject matter experts. In the security industry, it is especially vital to stay on top of the latest and most detrimental threats that face our communities. CARVERCON addresses these concerns by looking at them head-on and provides attendees the opportunity to interact directly with industry-leading professionals.

The convention spotlights how the CARVER Target Analysis and Vulnerability Assessment Methodology is one of the most effective and comprehensive vulnerability assessment tools available and serves as a “red thread” for the day’s many discussions.

CARVERCON attendees leave the convention with a more developed understanding of challenges facing both public and private secure security professionals, as well as offers strategies on prevention and response.

Proceeds will benefit the USF Office of Veterans Success.

Cyber Florida and Women in Cybersecurity invite Tampa Bay students and professionals to spend an hour with an outstanding woman in cybersecurity: Brigadier General Tina B. Boyd, USA, Director, Headquarters United States Central Command. A graduate of West Point, the U.S. Army War College, and the Georgia Institute of Technology, BG Boyd will speak about her distinguished work in the field and the challenges and opportunities for women in cybersecurity. The event will be held from 11:30 am to 1:00 pm at the University of South Florida – St. Petersburg Campus University Student Center Ballroom. There is no cost and lunch is included; however, seating is limited and registration is required.

K-12 students and teachers: join us for a free webinar to learn more about cybersecurity awareness through a series of fun activities and games! One lucky student will walk away with an Amazon gift card just for attending!

Come learn about the recently launched Cyber Citizenship Hub with 100 resources for educators to teach about misinformation online. Join in on the conversation with a panel of media literacy resource developers and get a closer look at the tools featured in the hub by Common Sense Education, Stanford History Education Group (SHEG) COR curriculum, and Teach Cyber.

This hub is part of the Cyber Citizenship Initiative, a project created in partnership with Cyber Florida, the Florida Center for Instructional Technology, New America, and the National Association for Media Literacy Education.

Visit the Hub at www.cybercitizenshipeducation.org. 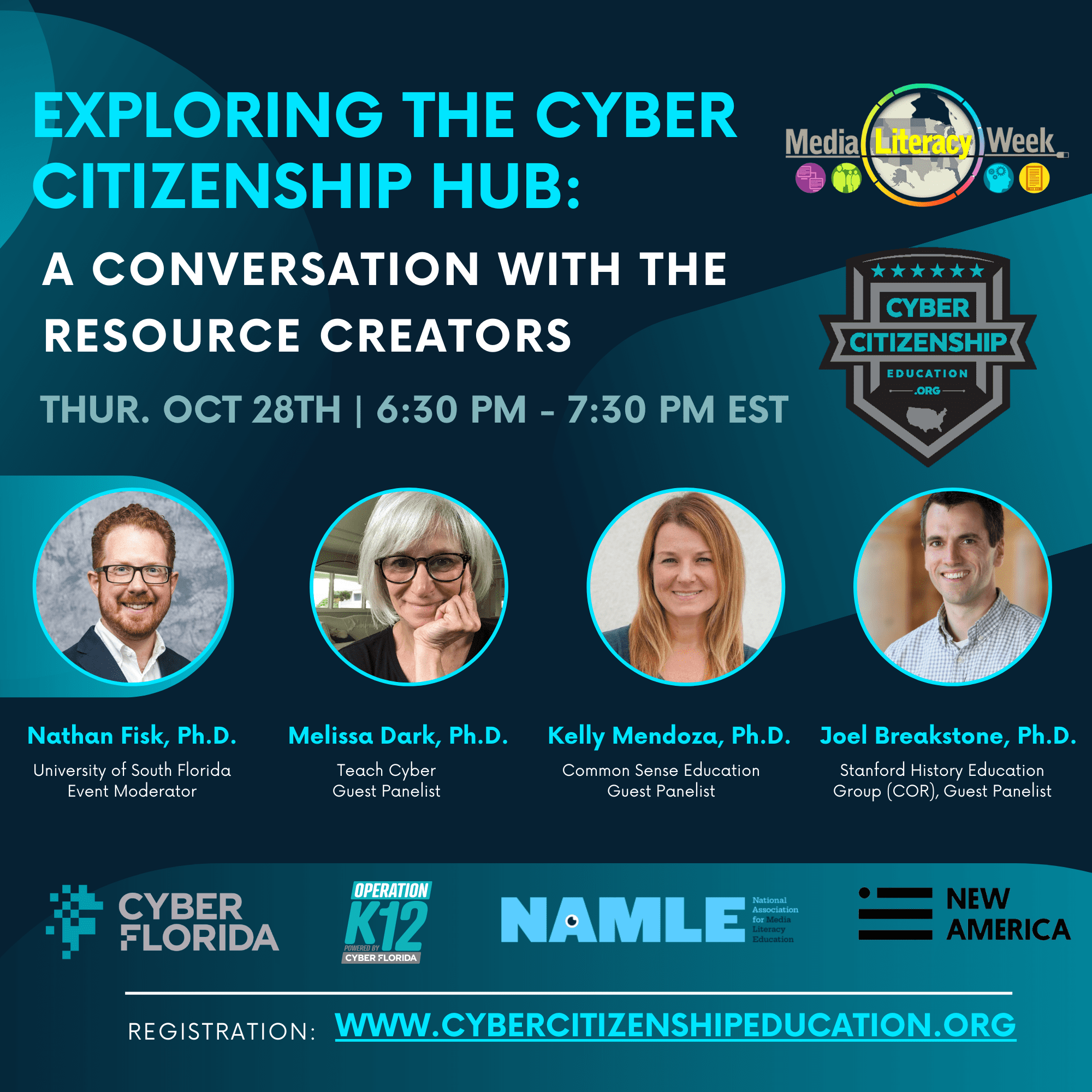 Registration for the November Cybersecurity for the C-Suite event will open shortly. If you have a question or would like to be notified when registration opens, please complete the form below.